Get in touch to discuss our Products and services

We are a group of companies creating the connectivity infrastructure of the future.
INVESTOR OVERVIEW
Subsidiary Companies

We're a public company that believes in sharing our success with all stakeholders. As such, when you work with us expect to be treated like a PEER: Prompt, Ethical, Empathy, Reliable.

Our organization is a constantly changing environment that demands flexibility, an open mind and an ability to think outside the box

We are a success-driven company with ambitious individuals, passionate about accomplishing our goals

Our organization recognizes the core of our success is our employees. We strive to recognize this fact every day

We strive to have open, clear communication that facilitates concise information flow, which in turn, improves morale and effectiveness

A company is only as strong as its executive leadership

GetCharged, Inc. (“Charge”) is a micromobility company dedicated to building the largest network of electric charging, storage and service stations for e-scooters and e-bikes. The Company’s docking stations will be installed in privately and publicly owned parking garages, lots, spaces and college campuses throughout major markets around the world, providing a convenient, safe and cost-effective space to charge, store and service e-vehicles, while reducing e-vehicle clutter on city streets and sidewalks. Charge has entered into numerous agreements with garage operators and property owners securing a network of nearly 2,500 locations to install Charge’s docking stations. Charge is also developing a proprietary mobile application that will interface with its docking stations and provide users with available locations as well as real-time e-vehicle availability of partnered rideshare platforms.

Globally renowned serial entrepreneur with over two decades of experience in executing disruptive approaches to a wide range of industries including media, transportation, real estate, insurance, and consumer staples. Founded numerous companies with multiple successful exits. Angel investor in over 30 leading startups in healthcare, real estate, infrastructure, and consumer technologies, including All Things Good, ADF, Fundrise, Lime, Nutrafol, Suzy, and Startup Health. Co-Founder of YJP New York, President, Chairscholars, a non-profit focused on helping young adults attend college on scholarship. Named New Yorker of the Week, one of the “30 Most Influential People in Nightlife” and featured in Crain’s “40 Under 40,“ he has also been featured in Forbes, NY Post, and Wall Street Journal.

Kenneth Orr, founder and CEO of KORR Acquisitions Group, Inc. has initiated numerous activist investments, all of which have outperformed the markets, proved profitable, and have provided Ken with specific skills and knowledge that can only be gained through experience.
Mr. Orr’s campaigns in the past have included, Surge Components (resulted in a merger), NuHorizons, Inc. (resulted in a sale to Arrow), Calton Homes (resulted in a special dividend).
Since founding KORR, Mr. Orr has been an activist in Sanderson Farms (buybacks), The Andersons (takeover bid by a partner for $1.5 billion), Rocky Brands (divestiture), Skull Candy (sale) and Medallion Financial (de-consolidating a trust and issuing unsecured notes).

An accomplished business executive with a proven track record of delivering bottom line results in diverse markets. A change agent and motivator, focused on stakeholder and customer satisfaction.

Pathfinder Consultants International, Inc. | Founder & CEOFormer FBI Supervisory Special Agent
‍
Prior to forming Pathfinder Consultants International, Philip Scala served the United States both as a Commissioned Officer in the US Army for Five years followed by his 29 years of service with the FBI.
‍
Mr. Scala served in the United States Army from 1974 through 1979. He graduated from the Airborne, Ranger, and Pathfinder Schools (Honor Graduate) at the Fort Benning Infantry School, and served with the First of the Sixth Infantry, First Armored Division, in the Federal Republic of Germany (1974-1977). During his service, he was promoted to the rank of Captain. Upon acceptance in to the FBI academy, Captain Scala resigned his commission, and entered the FBI Academy located on the United States Marine Corps Base at Quantico, Virginia; graduating and being appointed as a Special Agent of the FBI, in April of 1979.
‍
Throughout his 29-year career with the FBI, he worked, supervised and lead investigations on nearly every type of federal crime, including securities fraud, white collar crime, money laundering, tax violations, narcotics, racketeering, homicide, violent crime, firearms, and public corruptions. Mr. Scala has been the recipient of numerous commendations and awards for outstanding service, notably the FBI Shield of Bravery, as a group commendation, as the SWAT team leader of the Al-Qaeda Bomb Factory Raid, on June 3, 1993.
‍
Mr. Scala was assigned to the Criminal Division of the New York Office. He served in numerous assignments within the Organized crime branch and was sent to the Defense language Institute in Monterey, California to gain proficiency in the Italian/ Sicilian languages.

Mr. Scala participated in the investigations of the La Cosa Nostra Commission, “the murder of Paul Castellano”, “the investigation, and cooperation of Sammy Gravano”, the investigations and convictions of Gambino leaders, Neil Dellacroce, and John J. Gotti. As part of the investigations of the La Cosa Nostra, Mr. Scala and his team infiltrated both the Italian and Russian Mob which lead to numerous convictions for Tax Violations, Racketeering as well as change IRS code to prevent these activities in the future. In addition, he served five years in numerous undercover positions in the national security and criminal divisions.
‍
Mr. Scala served 15 years in the New York SWAT team, including the leadership of the Brooklyn-Queens team and Senior team leader for the New York Division from 1990-1995. His training included certifications as Rappel-Master, Tactical Instructor, Sniper, and Firearms instructor. He has participated in numerous SWAT operations, arrests, skyjackings and raids, including the Hell’s Angels HQ., the Atlanta Prison uprising, and the rescue of a mutinied oil tanker (Liberian-flagged, “Ypapanti”), in the Atlantic Ocean. In 1993, he led the raid on the Al-Qaeda bomb factory, where five terror operatives were arrested, and seized five explosive drums intended to destroy the United Nations, Federal Plaza, and the city’s tunnels.
‍
On May 10, 1998, Mr. Scala was selected as a Supervisory Special Agent for the Gambino La Cosa Nostra Squad (C-16). During his tenure, the squad successfully investigated and prosecuted the Mob infiltration of Wall Street, the New York Waterfront investigation, “Murder Incorporated,” labor racketeering, the NY Construction Industry, dismantlement of the Gambino family in NY and Sicily, the NBA referee case, and the largest consumers’ fraud ($1 billion) in US history, which involved the mob’s infiltration of the internet, telecommunications, and banking industries.
‍
From 2003-2008, Mr. Scala, developed and implemented the NY Office’s Leadership Development Program, which assisted relief supervisors develop excellence in leadership through mentoring, journalizing, “Best Practice” experiences, and accountability tools. The program was designed to be continuous, progressive, and measurable in assisting the FBI leaders maximize their leadership potential throughout their careers.
‍
Mr. Scala received his Bachelor degree and Master of Business Administration in accounting from St. John’s University, he also earned a Master of Arts degree in Psychology from New York University.

Justin joined Weybosset Research & Management, LLC in October 2014 as a portfolio manager. Prior to joining the firm, he was an equity analyst and trader at Bay Crest Partners for five years, specializing in large cap companies. Justin has been instrumental in helping build portfolios at Weybosset– think, trains, truck engines, beer, industrial gasses, and retailing. Before Bay Crest, Justin worked as head trader and portfolio manager for Horn Capital Management, a hedge fund based in New York City. Justin received his BA from New York University and most recently attended the Harvard Kennedy Schools program, Investment Decisions and Behavioral Finance. He currently splits his time between New York and Providence.

James F. Murphy brings more than 40 years of investigative and consulting experience as the Founder and President of Sutton Associates. From 1980 to 1984, Mr. Murphy was an Assistant Special Agent in Charge with the Federal Bureau of Investigation, responsible for a territory encompassing more than seven million people. His investigative specialties included organized crime, white-collar crime, labor racketeering and political corruption. From 1976 to 1980, Mr. Murphy was assigned to the Office of Planning and Evaluation at FBI headquarters, Washington, D.C. In this capacity, he evaluated and recommended changes in the FBI’s administrative and investigative programs. Since entering the private sector in 1984, Mr. Murphy has advanced the industry by developing systematic and professional protocols for performing due diligence, as well as other investigative services.

Entrepreneur, investor, and two-time NBA All-Star and record-holder, over a thirteen-year career, Baron Davis played for the Charlotte Hornets, the Golden State Warriors, the Los Angeles Clippers, the Cleveland Cavaliers, and the New York Knicks. Known for his electrifying style on the court, Davis was a powerful point guard, who won national acclaim for executing in crucial, high-pressure moments, when his team needed him the most. As a businessman, Baron was one of the original investors for Vitaminwater and helped launch Thrive Market.

Baron is also the founder of several companies, including Sports and Lifestyle in Culture (SLIC), The Black Santa Company, BIG and No Label—each with the objective of combining creative talent with original publication and production to develop and provide educational and heartwarming stories that appeal to global audiences of all ages.

Mr. Carson is Co-Founder and Partner at Interprise Partners where he is responsible for the overall guidance of the company and the portfolio. In this role, Mr. Carson focuses on the total financial health of Interprise and its holdings with an emphasis on capital structures, deal origination, and strategic planning.  Complementing his prior experiences in investments and operations, he supports portfolio executive teams with capital market insights and growth strategies. Mr. Carson becomes directly involved with portfolio companies to support strategic alliances, business development, and corporate development initiatives.

Experience you can count on.

TransWorld Enterprises is a holding company targeting acquisitions in a diverse array of business industries and specialties, including: Investment, Transportation, Technology, and Asset Based Lending. Our goal is to deliver solid and consistent value to our shareholders.

Efforts under the company are intended to help the service branch meet technical program standards for micromobility.

Charge.us is a company dedicated to building the largest network of electric charging, storage and service stations for e-bikes and e-scooters.
‍

Operating partners in both real estate and litigation funding have proven track records that outperform their respective markets, with exceptionally low default rates and high ROIC.

The Evolution of Charge Enterprises 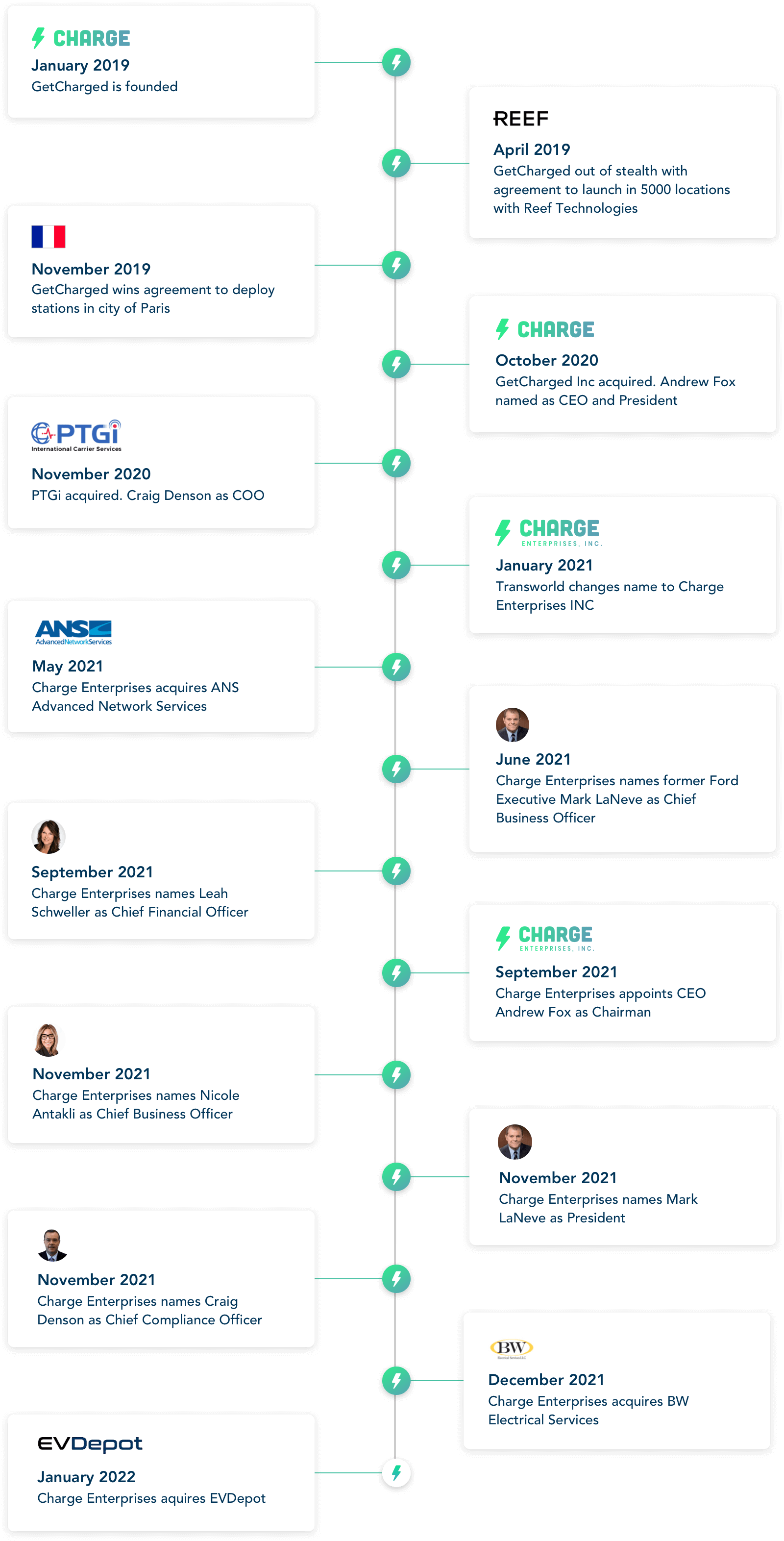 Inquire here about our products and services

Thank you. We will be in touch.
Oops! Something went wrong while submitting the form.